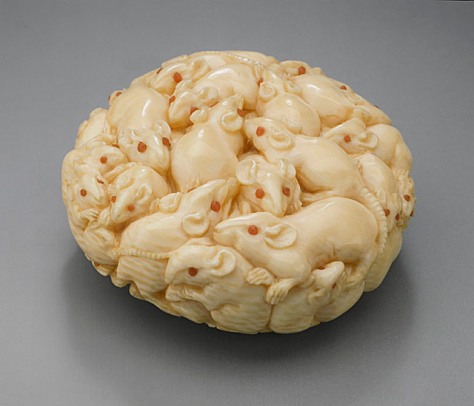 At once beautiful and a little bit strange, this wonderful carving of a cluster of rats is actually a tiny (4 cm in diameter) ivory netsuke, made in Japan in the late nineteenth or early twentieth century, and now part of the Japanese Art collection in LACMA. Netsuke are miniature sculptures invented in 17th century Japan as a toggle to secure a small pouch or container to the sash of a kimono. Although first produced to fulfill a utilitarian function, they evolved into objects of impressive craftsmanship which reflected many aspects of Japanese culture. As the first animal of the Chinese zodiac (which was adopted in Japan around 600 AD), rats (nezumi) were a popular motif in netsuke carving, which, according to the British Museum, were given as gifts to people born in the Year of the Rat. White rats in particular were seen as lucky in old Japan, believed to be a messenger of Daikoku, one of the seven gods of luck.

One thought on “A cluster of rats”