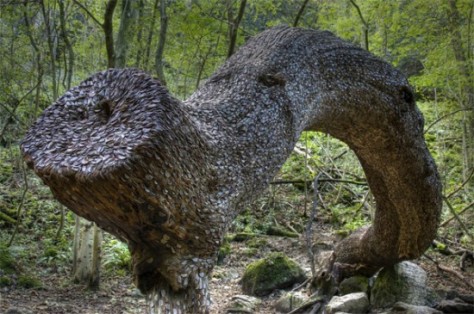 Sticking hundreds of small denomination coins into tree trunks is apparently a popular way of getting rid of illnesses.
At least that’s what the staff at a holiday attraction in Gwynedd discovered after investigating the story behind several coin-covered tree trunks in the vicinity of Italianate village Portmeirion.

The coin-covered trees have been traced back to the 1700s, when they were apparently used as wishing trees. People believed that a person suffering from an illness could hammer a coin into a tree trunks and the tree would take the illness away, but if someone removed the coin, they themselves would become ill. Whether some folks still believe this legend, or they do it simply because it’s fun is still a mystery, but the fact is this bizarre habit has spawned some pretty unbelievable sights that apparently unique to the UK.

As if bacon perfume wasn’t enough to help people carry the smell of the tasty treat with them wherever they went, a Seattle-based food company has just launched a limited-edition Bacon Shaving Cream. 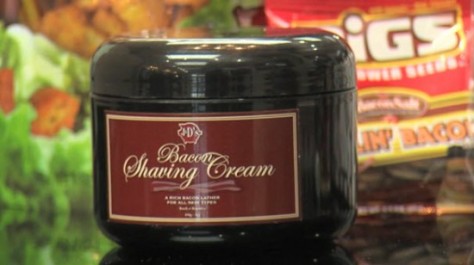 Justin Esch and Dave Lefkow, the two man behind J&D Foods, have just released their newest idea – a bacon-scented shaving cream that will allegedly make users ’smell and feel like a champion’. Yup, the smell of bacon usually has that effect on people, but what I’d like to know is how does one restrain from having a taste of the heavenly-smelling shaving cream. After all, as inventor Justin Esch himself admits, “there is nothing more powerful than the smell of bacon, nothing.” Company co-founder Dave Lefkow also wrote in a press release:”Bacon Shaving Cream is a high end, luxurious bacon-scented shaving cream for all skin types. Our advanced heat-activated aromatic technology lasts for hours and delivers maximum bacon scent when you need it most.”

In the old days, people used bacon grease to shave their beards, and since the breakfast food is so hugely popular these days, a bacon-flavored shaving cream just made sense. And at $14.95 it’s a steal if you can’t get enough of that crispy treat smell. But you’d better act fast, as J&D have created just 2,500 jars of the delicious-smelling lather, and with the holidays just around the corner, they’re bound to sell like bacon hot cakes.
http://store.baconsalt.com/Bacon-Shaving-Cream_p_170.html

Blk is a spring water that is infused with fulvic acid, a mineral that colors the water black.

It is available on Amazon.