Crayola brand crayons were the first kids crayons ever made, invented by cousins, Edwin Binney and C. Harold Smith. They had already invented a new wax crayon used to mark crates, but it contained carbon and was too toxic for children. This started research into nontoxic drawing tools for kids. They were confident that the safe pigment and wax mixing techniques they had developed could be used for a variety of colors.

The brand’s first box of eight Crayola crayons made its debut in 1903. The crayons were sold for a nickel and the colors were black, brown, blue, red, purple, orange, yellow, and green.

Some of these photographs were taken by Bryan Derballa, and show the inside of the Crayola factory which produces around 12 million crayons every day.

Today, there over one hundred different types of crayons being made by Crayola including crayons that: sparkle with glitter, glow in the dark, smell like flowers, change colors, and wash off walls and other surfaces and materials. 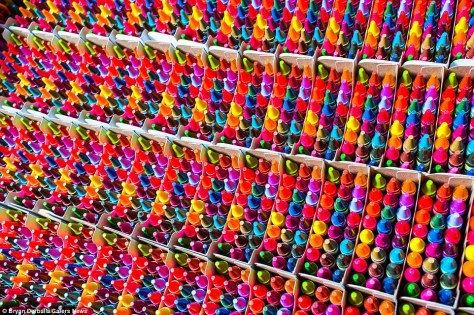 The modern crayon, originating in Europe, was a man-made cylinder that resembled contemporary sticks.  The word Crayola was created by taking the French words for chalk and oily and combined them. Later, powdered pigments of different colors replaced the charcoal. Later substituting wax for the oil made the sticks sturdier and easier to handle. 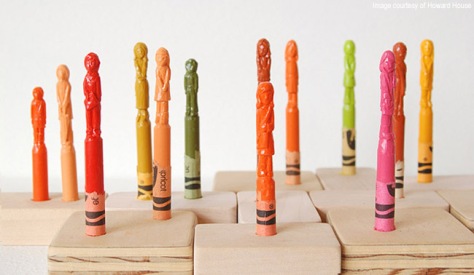 Most guards today don’t actually carry firearms, unless they’re isolated away from the prison population. In the old days however, prison guards needed a little backup power while using both hands to open cell doors. Hence the creation of jailer key guns, a cell door key that doubled as a primitive one-shooter. These “turnkeys” were filled with gunpowder that would fire the miniature key-pistol in case there was any trouble from the prisoner when the cell door was opened. They may not have been too effective, having only one shot, but it was enough to discourage the plans of potentially dangerous prisoners.

Since most of the key guns were thrown in rivers and swamps after prisoners took them during escapes, they are now very rare and only line the pockets of antique collectors.

The perfect stress reliever. Bubble wrap exists so that people can pop them. Suprisingly there is another thing you can do with it: make art. Bradley Hart, has taken packing material to an entirely new level. Originally he painted discarded materials with the exterior of bubble wrap creating abstract artworks, his newest pieces have him injecting each bubble with paint.

Hart’s newest works are unusual in the way that each bubble is used as an individual pixel. Like using colored tiles, but instead injecting each bubble with paint to create an image. There is one of Steve Jobs, and another of a  street scene in Amsterdam. Each image when complete, is made up of shiny bubbles of color.

Hart’s work transforms consumerism into contemporary art, while doing so gives us a new way in which to view the time we live in.

Wang’s cybernetic sculptures explores the relationship between man and technology. The  faces are in fact a self portrait of Wang himself. Wang’s combining of human features with that of the machinery come from the stages of cybernetics. He is particularly interested in the stage of cyborg, of robots being able to take on roles of the human body such as artificial arms and legs to aid humans. Wang is challenging that human morality is lost when artificial intelligence advances .

Wang says, ” A body is the most important part that makes human beings human. Even now, we are transforming our body through scientific technology. If we continue changing our body, we will turn into something else other than human. If humans turn themselves into cyborgs, their finite bodies will vanish and only their thoughts will be left. Whether it is good or bad, I believe thinking independently from others will be the most valuable.” 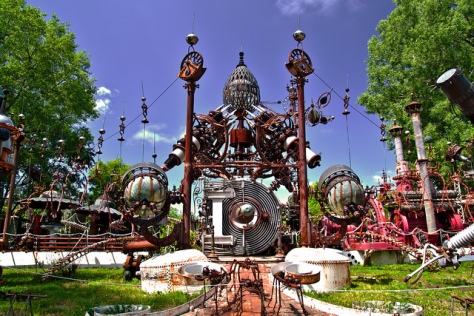 Ever think of escaping the frustrations of life?

Then head down to Dr. Evermor’s Forevertron in Sumpter, Wisconsin and hitch a ride on his space capsule. Forevertron is the largest scrap metal sculpture in the world standing 50 ft. high and 120 ft. wide. Dr. Evermor is the creation of Tom Every, a salvage expert turned artist.
For most of his life, Tom Every was a professional destroyer. He worked in Wisconsin as an industrial wrecker, demolishing old factories, breweries and any other building that stood in the way. After retiring in 1983, he decided he would dedicate the rest of his life to being a creator: Dr. Evermore, to be exact. For decades, he collected scrap metal and machines that he found interesting and historical.

From the highway, the top of the 320-ton Forevertron is barely visible, its trans-temporal egg chamber poking up above the foliage.

Made from industrial scrap, the sculpture park includes a decontamination chamber from NASA’s Apollo project, dynamos built by Thomas Edison and scrap metal salvaged from an army ammunition plant.

His greatest achievement is the Forevertron, “designed and built in a timeframe of around 1890 … whereas our dear doctor is a scholarly professor who thought he could perpetuate himself through the heavens on a magnetic lightning force beam inside a glass ball inside a copper egg.

Dr. Evermor believes that if he can combine magnetic force and electrical energy, he can propel himself through the heavens on a magnetic lightning force beam, that will take him to his salvation. The Forevertron is a fantastical 300-ton sculpture made of recycled parts. At the top of the Forevertron sits a glass ball inside a copper egg that is Dr. Evermor’s space capsule.  There’s also an antigravity machine, a teahouse for Queen Victoria and Prince Albert to observe the event, a telescope to watch as Evermor is hurled to his meeting with God, and a listening machine that will transmit Evermor’s messages back to Earth.
http://www.roadsideamerica.com/story/2239

A great fear of mine although most people seem unconcerned. Devices may be convenient, but cannot compare to the feel of printed material.
I suppose everything has a point of extinction.

It’s difficult to comprehend that this replica of an 18th century gentleman’s tool chest, packed with tools, is only 2 inches long. It is a masterful 1/12 scale reproduction based on the Hewitt chest at Colonial Williamsburg and is by celebrated miniaturist William Robertson.

Robertson’s tool chest contains all the same tools that were found in the original. All the tools work, even the plane’s tote (handle) is set a scale 1/8″ to one side as the original. The saw has 160 teeth to the inch. Robinson says that the hardest tool to make was the folding rule with 5 leaf hinge. It is about .030″ thick and hand engraved on boxwood.
Also included in the tool chest are a Kent-style hatchet, claw hammer, a riviting hammer, marking gauge, five gimlets, a smooth plane, backsaw, saw wrest, divider, awl, round file, burnisher, inside/outside calipers, bevel gauge, try square, three turnscrews, four brad awls, an oilstone in its case, three tanged chisels, a mallet and a beak anvil. As stated all the tools are fully functional, with blades made of steel. Other parts are made from brass with handles made of pearwood, boxwood, African blackwood, Bolivian rosewood and maple.
The chest and tools took about 1,000 hours to complete.
http://www.toolchest-site.com/5/william-robertson-miniature-tool-chest/

“Steam of Consciousness” by Christopher Conte is a kinetic sculpture of a skull that is powered by a miniature steam engine. Conte specializes in biomechanical sculptures and has unusual qualifications that make him uniquely suited to his artform—before he became a full-time artist, Conte spent 16 years making artificial limbs for amputees.

Where we love dogs, read books, and talk Kentucky politics.